The headquarters of the Ministry of Agriculture, Fisheries and Food has hosted on Thursday, December 12 the INIA Forum on «Prevention and control of Xylella fastidiosa in Spain in the context of climate change», in which researchers working in all of Spain to develop control and eradication strategies against a bacterium that poses a potential risk to our agriculture, and in particular to the olive grove.

Pedro Valverde, a researcher at the University of Córdoba, a Life Resilience partner, has attended the forum presenting the project.

So far, in Spain, the bacteria has been detected in the Balearic Islands, which were declared as a containment zone two years ago (with the exception of Formentera). Likewise, isolated cases have been detected in Alicante, Madrid and Almería. However, administrations, research groups and, above all, the olive grove sector remain alert to a potentially serious threat, which may put at risk the olive grove of the world’s leading producer of olive oils. 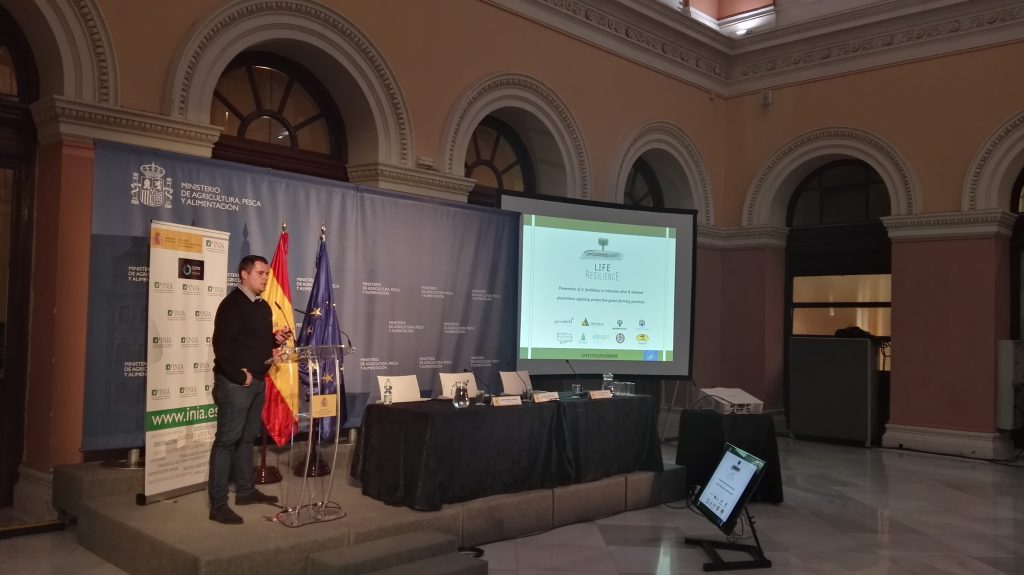 «From the first minute, we became aware that the sector had to be deeply involved in seeking solutions to this problem,» said the head of R+D+ i of the Organization, Rafael Sánchez de Puerta, during the Forum. For that reason, the Olive Oil Interprofessional embarked on a national research project that INIA promoted in 2017 and that crystallized in August 2018 in a Research and Development contract that has allowed support to work on six lines, which they try to give a broad spectrum response to a problem that does not have a simple solution. Lines that, a year later, are already paying off. “Now we know the bacteria better, how plants develop and infect. And not least, how to detect it early and its development patterns. And the same can be said of the vector that the bacteria transmits. We know more about their life cycles and the strategies we can address to control their development in our country. ”