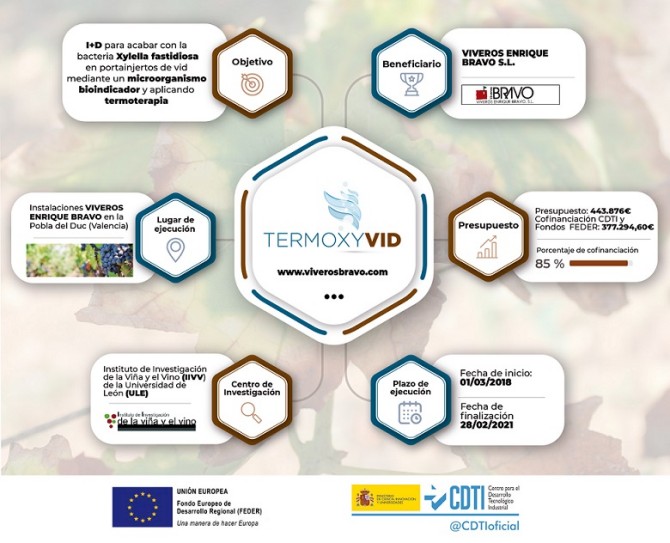 The TERMOXYVID R&D project has successfully completed the first of the three technical-economic milestones. In this first phase, they have achieved the selection of the bioindicator microorganism with which it is hoped to control the Xylella fastidiosa bacteria in vine rootstocks. Likewise, the prototype with which to carry out the treatment has been designed, built and implanted in the nursery facilities.

This project led by Viveros Enrique Bravo, co-financed by the Center for Industrial Technological Development (CDTI) with ERDF funds from the European Union, seeks to use thermotherapy to deal with the harmful Xylella fastidiosa bacteria in vine rootstocks without damaging the plant material. Although this treatment has already been used at an industrial level for the control of fungi in grapevine wood diseases, there is no evidence of its use to deal with this specific pathogen, nor about its application in vine rootstocks.

The results of this research will be a considerable contribution to the Spanish agricultural sector since Xylella fastidiosa represents a growing threat to citrus, olive and grapevine crops, among others.

In TERMOXYVID the group of the Vineyard and Wine Research from the Institute of the University of León participates in it being in charge of identifying the population of endophytic bacteria that inhabit the vine rootstock xylem to finally select the bioindicator microorganism that will serve as a model of study.

Currently, they have selected the best inoculation methodology to determine the colonization capacity of the interior of the vine rootstock and the work of applying different phytosanitary treatments in different varieties and plots has already begun, hoping to determine the presence or absence of diseases in stakes and thus stop the vector that transmits the disease.