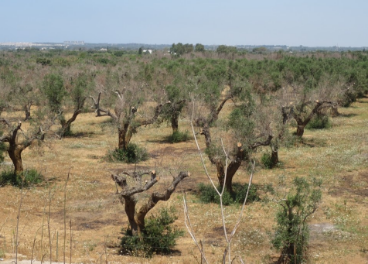 According to Olimerca, the Italian Olive Oil Consortium, Unaprol, has donated 55,000 olive trees of the Leccino and Favolosa varieties to be planted in the Salento region, severely affected by Xylella fastidiosa and therefore its production of olive oil has been seriously affected, with significant economic damage as well as landscaping.

This was announced by Coldiretti Puglia at the recently held Unaprol Assembly. In the words of Savino Muraglia, President of Coldiretti Puglia, “due to Xyella, oil production has experienced a negative trend in the province of Lecce with a 73% drop in olive oil production. The removal of diseased olive trees and replanting are the only real possibility for farmers and mills to start working and producing again.

The advance of the disease has left behind 21 million dry olive trees, as represented by the loss of production that has spread like a forest fire, since the bacterium advanced in the territory, towards the north, at a speed of more than 2 kilometers per month, up to Locorotondo in the province of Bari.

As analyzes of the plants surrounding the Xylella fastidiosa outbreak in Locorotondo continue, there are new findings from infected olive trees. This is confirmed by the latest monitoring published by «Xylella Emergency», which points to two new positive olive trees that increase the number of infected plants to 27. The new findings, which further expand the outbreak, this time in an east-west direction, will require more samples before its final delimitation.

To date, around 11,700 infected olive trees have been eradicated in the past five years. At the last hearing in the Agriculture Commission, Gianluca Cardone, director of the Department of Agriculture, and Gennaro Ranieri, commissioner of ARIF, admitted that «the results did not live up to expectations.» In this sense, the President of the Commission immediately contested how the controls were carried out in the territory, with the aim of verifying possible breaches, after the maximum time.