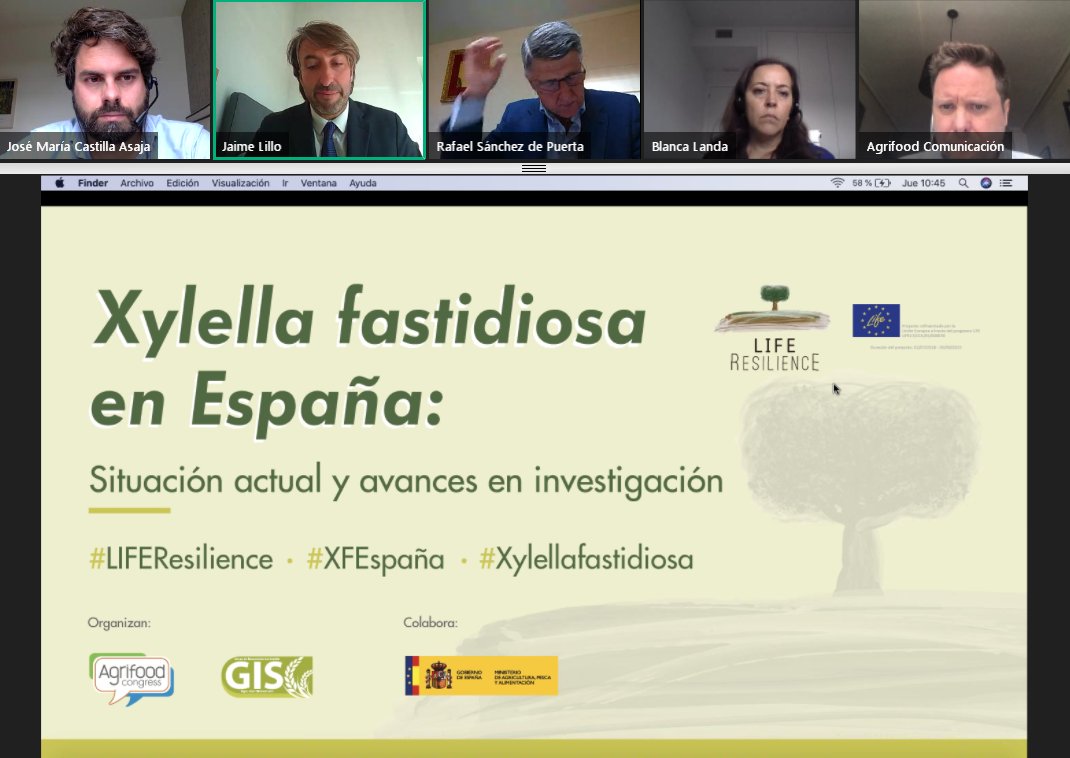 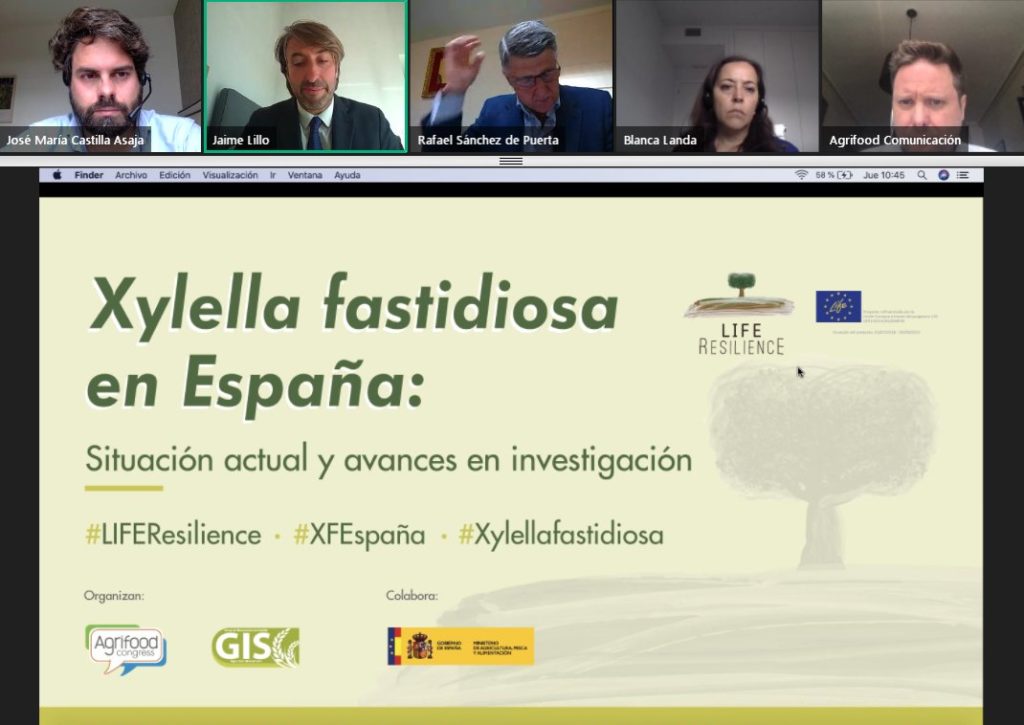 The LIFE Resilience project, co-financed by the LIFE program of the European Union, whose main objective is the prevention of Xylella fastidiosa in high-density olive and almond farms; Together with the collaboration of the Ministry of Agriculture, Fisheries and Food and the Sustainable Innovation Group for the food sector (GIS), held an online conference last Thursday, November 5 under the title «Xylella fastidiosa in Spain: current situation and progress in research ”, which was attended by more than 110 people and which had the participation of various experts who are currently working on the control and prevention of the bacteria in our country.

The inauguration was given by the coordinator of the GIS, Ricardo Migueláñez, and the general director of Health of Agricultural Production (MAPA), Valentín Almansa, who wanted to refer to the knowledge they have obtained during these last four years: “When we began to work on the bacterium, we had little information and research on it, we were forced to learn by working. Nowadays, we have managed to advance reaching such important milestones as knowing that there are many and diverse types of Xylella, some much more serious than others, and that this disease is not Ebola at all and can be managed ”.

Subsequently, the deputy general manager of Plant and Forest Health and Hygiene (MAPA), José María Cobos, took the word to comment on the legislative changes that have been made with Commission Regulation (EU) 2020/1201, which establishes the measures for prevent the introduction and spread within the Union of Xylella fastidiosa. «This new law repeals the previous Execution Decision (EU) 2015/789, updated on several occasions as a result of advances in available scientific and technical data.» In addition, Cobos wanted to refer to the National Contingency Plan prepared by MAPA in collaboration with the Autonomous Communities: “The National Contingency Plan, which is approved within the National Phytosanitary Committee, includes a Prospecting Protocol, for its early detection , and an Eradication Program, which includes the measures to be adopted in case of occurrence. Based on this plan, the Autonomous Communities can carry out their own Contingency Plans adapted to their special characteristics ”.

After his intervention, Migueláñez gave way to the first round table of the day, where experts such as Gabriel Torrens, general director of Agriculture, Livestock and Rural Development of the Balearic Government; Miguel Ángel Miranda, professor and researcher at the University of the Balearic Islands and INAGEA; and Eduardo Moralejo, biologist and researcher in phytopathology, commented on the current situation of the bacterium in the Balearic Islands. According to the latest available data, there are around 1,280 positive plants distributed on the islands of Mallorca, Ibiza and Menorca, and 25 host plants of Xylella fastidiosa have been identified, so that the entire territory of the Balearic Islands is a demarcated area and is considered infected area.

The online session continued with a second round table where different experts commented on the cooperation between public and private organizations against Xylella. José María Castilla, Head of Office, Permanent Representation in Brussels ASAJA, one of the nine partners of the LIFE Resilience project; was in charge of moderating the table, in which participated Ricardo Migueláñez, GIS coordinator, on behalf of LIFE Resilience; Jaime Lillo, deputy director of the International Olive Council (IOC); Blanca Landa, member of the scientific direction of the E-RTA INIA-OIAOE project; and Rafael Sánchez de Puerta, head of R + D + i at the Interprofessional del Oil de Espana. All agreed that it is necessary for European institutions to legislate based on research, and to do so by financially supporting farmers who have been affected by Xylella. At the national level, they commented that the Spanish authorities must adopt new exceptional measures, if the situation requires it, to stop the vector and thus be able to more effectively stop the spread of the bacteria.

During the round table, Migueláñez, wanted to give as an example the work that the LIFE Resilience project carries out to develop genotypes of productive plants resistant to pathogens, apply practices and innovate in natural methods of vector control to demonstrate its effectiveness in preventing negative effects of Xylella fastidiosa. “LIFE Resilience has taken great steps to shed light on this very worrying issue for the olive grove and woody plants sector, offering practices and ideas on how to work and improve to prevent this disease and reduce the losses it entails in the Spanish agricultural sector ”.

As it was consolidated in the conference, there are different research groups in Spain that are investigating the bacteria through various national and international projects and, therefore, it is convenient to pool and take advantage of existing knowledge to work all in the same direction.

Video of the conference